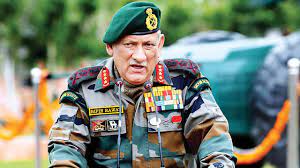 A helicopter crashed in Ooty Near Nilgiri Hill. It is learned that Army Chief Bipin Rawat was present in the helicopter. It is unknown at this time what he will do after leaving the post. The situation is not well at all really it’s very sad news for our Nation. The helicopter of CDS Bipin Rawat Crashed in Ooty the information realy a bolt from the blue for me. I am speechless…

General Bipin Rawat Helicopter Crash Live Update: Chief of Defense Staff Bipin Rawat and his wife were killed among 13 people after an IAF helicopter crashed near Coonoor in Tamil Nadu on Wednesday.

“With deep sorrow, it has now been confirmed that General Bipin Rawat, Mrs. Madhulika Rawat and 11 others on board died in the unfortunate accident,” the Indian military said in a tweet.

The accident happened about 10 kilometers from where the helipad was supposed to land. Earlier today, Defense Minister Rajnath Singh informed Prime Minister Narendra Modi about the incident. According to sources, Singh will brief Parliament on the incident tomorrow. See pictures from the event site here.

Earlier, sources said that at least three people injured in the accident have been taken to a nearby hospital. The crash happened in the Nilgiris shortly after the MI-Series helicopter took off from an army base in Sulur.

The helicopter of CDS Bipin Rawat Crashed in Ooty. More will come to share with you.

After overcoming all these, one step after another, he rose to the highest position in the Indian Army. The post of Chief of Defense Staff or CDS was first created during the Modi government. Prime Minister Narendra Modi has chosen Bipin Rawat for this important post. He is also the administrator of the Tri-Service Organization, a joint platform of the three forces. CDS is also a member of the Defense Purchasing Equipment and Planning Committee. The CDS presented it to the government by increasing the coordination between the forces on various issues and formulating strategies on military issues. He also gave an annual report on the joint activities of the three forces. His father was also an army officer. He has specialized experience in high-altitude warfare operations. In 1976, during the tensions on the Arunachal border, the Chinese People’s Liberation Army was confronted by an Indian Army battalion led by Bipin Rawat. In 2015, militants entered India from Myanmar and killed 16 Indian soldiers in Manipur. In retaliation, the Indian Army killed the militants in Myanmar. The 21st Parachute Regiment was in charge of that operation. Bipin Rawat was in charge of the Third Corps at Dimapur at that time. He is the third officer of the Gorkha Brigade to become the country’s army chief after Sam Manekshaw and Dalbir Singh Suhag. After retiring as Army Chief, Bipin Rawat was appointed as the first Chief of Defense Staff of the country. Generally, the retirement age of the top officers of the three armies is 72 years. In the case of the Chief of Defense Staff, the retirement age is 65 years. When India faced the Chinese army at Pangong Lake, General Rawat was the Chief of Defense Staff. General Bipin Rawat has been awarded the Distinguished Army Medal for his contribution to the Indian Army, the Best War Service Medal, and the Distinguished Service Medal for his contribution to the Indian Army.

More details will be shared about Great Indian Hero…