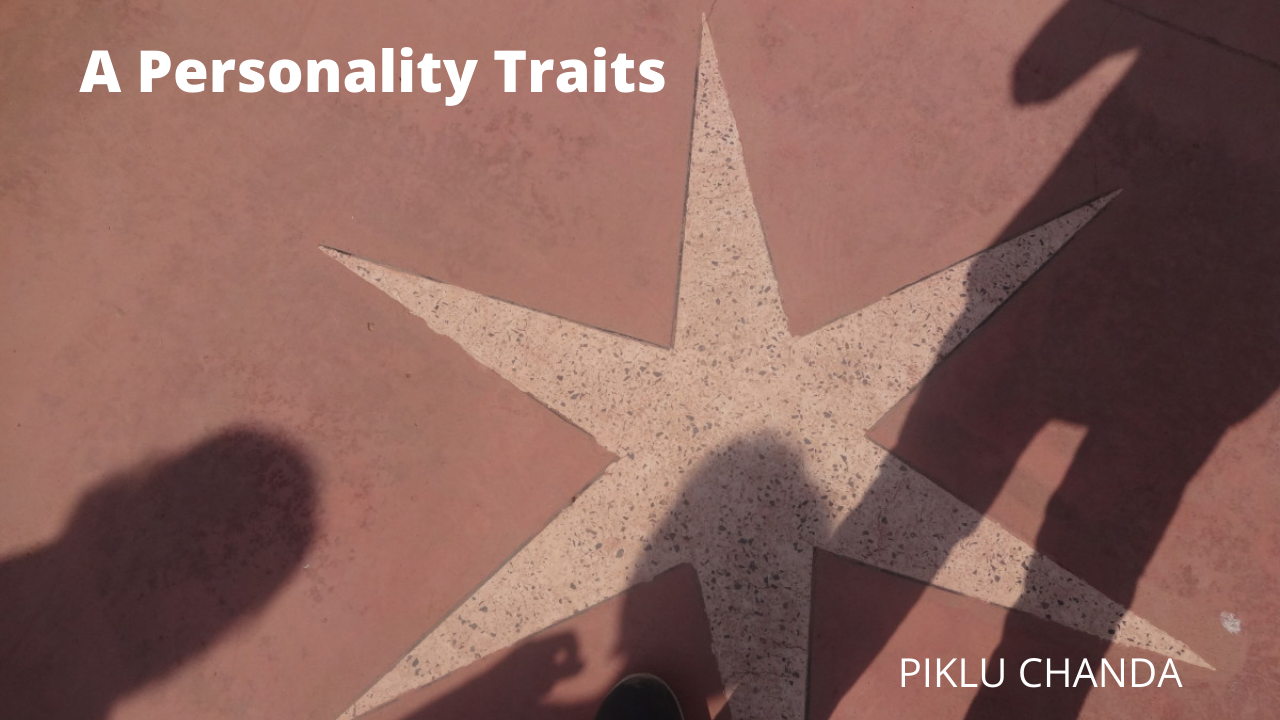 Man’s personality traits are just a combination of his surroundings until the last moment of his life.

A Personality traits mainly reflect people’s characteristic patterns of thoughts, feelings, and behaviors and of course I can say that its existence depends on from human faith & situation & his living environment. The perception of everything in life is personality. Personality traits imply consistency and stability — someone who expertise in a specific trait like acting is expected to be sociable in different situation also. In reality it differs from originality because of human personality.

Man’s personality traits are just a combination of his surroundings. Until the last moment of his life, man is dependent on the circumstances around him. Perhaps someone will disagree with me on this point because there are some real examples that cannot be denied. For example, when we hear about “charity begins at home” as a human being we cannot deny its true values. But it doesn’t mean that his attitude cannot be changed in different situation. Its all about of his surroundings & depends on his faith what he achieved earlier.

Sometimes all the benefits are inherited due to genetics

Sometimes all the benefits are inherited due to genetics but no one can deny his personal identity which develops in every moment of life starting from childhood. And in his efforts man is guided, perhaps transformed into an ideal man or a failed personality.

The relentless development of consciousness in the human mind is just a relentless effort. When and how it develops, the person’s characteristics or tastes go hand in hand. It would be very unfair not to give a small example of it. We know that childhood is very curious. So, maybe if someone comes to the house and even though he is a beggar for some reason, the child of the house will run first and he will feel very proud if he can give him something .

But in that case, if the parents of the house do not agree to it, but the child’s mind is severely injured. Sometimes the childish mind chases away the beggar with the consent of the parents and enjoys it very much. In the blink of an eye, our childish minds are aroused, but our personal tastes or characteristic do not flourish. We can clearly understand a kind of human taste from the side events.

The perception of everything in life is personality and human personality. But I can say that it depends on the faith of the people. A real example of this is the Ramayana. Maharshi Balmiki, “the author of the Ramayana”, was a terrible man, but despite being a spectator in life, he was a very pious and learned man, so he faced the situation when he stood up and realized what was true and what was false. It did not take long for his spiritual thoughts to realize the truth. Maharshi Balmiki Muni was able to become a great man by giving up everything and leaving the path of injustice and violence.

Therefore, it can be assumed that the manifestation of human personality is only a crop of human spiritual thoughts and the surrounding situation is only a process of time. The real truth can never be suppressed. Just as light cannot be hidden, when light shines, its true vibration will take place in the midst of darkness.

The development of consciousness is very sincere and influences the personality traits of the individual but temporarily the surrounding circumstances force the person to live an unknown life. From the temporary awakening of consciousness, all ignorance is dispelled and the true nature of man is revealed in real form.

And that is where the real success of human life is found. I think the thing that plays the biggest role in awakening the subtle consciousness is faith. In the power of faith & self confidence, people have conquered the impossible one day and given the present form in the beautiful world.

Sometimes when I think about it, I think faith is the source of all the energy in the world. Faith awakens the latent consciousness of man and guides him on the path of truth to the path of peace.

The key to his success is faith. As faith strengthens and strengthens a person’s character, it sometimes becomes a cause of weakness. Weakness of the human mind or belief in oneself makes a person weaker and weaker. I do and start doing wrong one after another.

As long as people think of themselves as a student, everything is fine, but when we start thinking of ourselves as teachers, we close the door on our learning process & eager. It would not be wrong to say that the real problem of life begins and there is no solution. we don’t feel any jerk when we walk on smooth path in life but we feel real jerk when we walk on uneven path.

Life is a real test for us in difficult times. If we can have a hard time, we will find success as human beings and if we can’t overcome it, we will set an example of a failed life.

In life man can live a very ordinary life beautifully and successfully if man expresses his past experience and acknowledgement as a constant student for the future. Always learn from your mistake and never get too excited about success.

So, in the conclusion I can say that the attitude of the people is the reflection of its surroundings partially but depending on the situation is a bit like a car accident, “to face one unseen incident.” Self-confidence leads people in the right direction but on the contrary when they become dependent on others they fall far behind. They feel at the last moment of the clone life but can’t control it, can’t solve it, finally get lost in the depth of darkness.

In religion and not in deeds

and not only inactive

Still they busy in beautification

And they live in a good mood

by boasting all the real,

Show fake excuses and they dance

Quoted from my poem.”DUMMY LIFE”